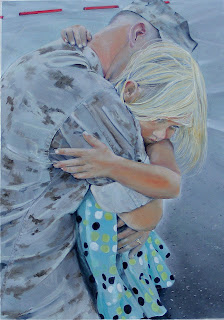 "Daddy Don't Go" is finished and on its way to getting framed.


I will be calling Major David Schreiner to show him the finished work.  We had a discussion when I was first working on it.  I have a few more to ask.  Addison is now 5.  Such sorrowful eyes.  I know her daddy loves her. 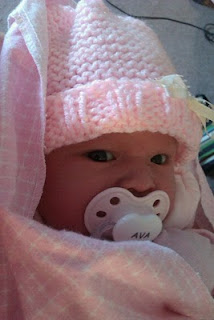 It reminds me we have quite a few new additions this deployment to Forest's 3/6 battalion.  The next painting coming up will be about those things that keep us going during deployment called, "While You Were Out".  We will keep little reminders close by like a bracelet or dog tag for a mom or fiance or wife.  Some of the guys will put photos under their helmets (Forest tells me the photos don't last long because of the sweat-ewhh!).  Some will have a photo of a new baby born in the US during the months of deployment.  Just wait until homecoming- Awhh!  These little ones are just so sweet.  And we are all praying for a quick and safe return home.    I am still looking for the rest of the babies pictures and getting permission to use the images for        this painting, so more to come.
"Got You In My Sight", The image is due to go to the Gamblin Paint company before the end of the day.  I will be putting the finishing touches on the weapon.  It is just a cool angle to look at. 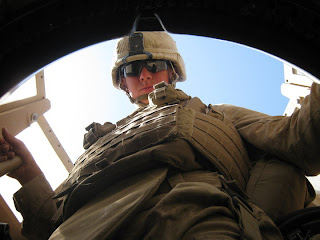 Big demo day at work.  I will be starting another PanPastel with Cpl Bryan Bullock(Cool angle on this one too).  Looking forward to this one on Velor Board.  Got to go.
Posted by Sharon A. Blair at 9:57 PM No comments:

"Got My Sights On You"

You may need to see "Got My Sights On You" at its finish to understand all that is happening in this painting.  The photographer gives you an unusual look into what a marine is looking through.  Ever wonder what it is like to take aim?  Deadly aim?  This is what it looks like from a warriors view. 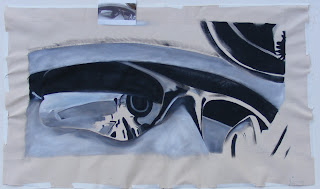 I am using an unstretched peice of canvas that I have applied over clear gesso.  Gamblin has a contest to produce a monocolor using Toret Gray with black and white.  More to come this week as Gamblin needs a final submitted by Oct 1.  I will be pushing because I also will be talking with some marketing consultants on my Military Series.  Busy week ahead.
Posted by Sharon A. Blair at 10:43 PM No comments: 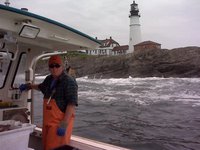 This is about a relationship between a father and a son.  We have very brave young men out there and our sons will lay down their very lives for those they serve along with and fight for.  Be glad America you have a marine watching over you.  They are truly mighty men of valor. 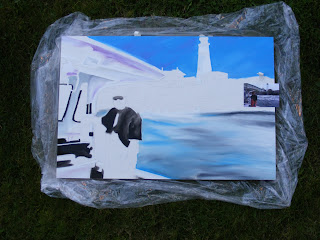 We talk to our sons out there in Afghanistan and we listen carefully to every word and unspoken pauses.  As a dad, Joel listens to what his son Rob is doing out there with absolute respect and awe.  You see as parents, our sons have become our heroes.  They have matured beyond their years as we reflect on the transformation we have seen from teenager to the warrior they are now.

Joel is a lobster man and his boat dances in the surf off  Portland Head's famous lighthouse.  There is a unique language out there that is exclusive to the area.  Lobsterman terms shared between father and son gave Joel a unique look into what our marines were doing.  If a call comes in while he on his boat Joel makes his way to the stern, dangles his feet over the water and talks in his metaphorical terms.  Rob will tell his dad that some days in Afghanistan new bait works better, red fish was expensive (better, more high tech weaponry) or herring bait meant (everyday weaponry used).  Sometimes in Rob's travels on his Afghanistan patrols, he may go the short distance between Cliff Island to Peaks Island, or as far as Cliffs Island to Portland.  No sensitive secrets given, just a language spoken in native lobstermans terms off the coast of Maine near the wreck of the Annie McGuire.  Joel sails his hauler with his son's photo in a medallion and a marine flag that he will not replace until his son comes home safe.  He even saves the threads from the flag that are wearing out in a bag nearby.  He will retire that flag with all its parts later.  For now, this father truly misses his son of whom he is so proud.  Rob and his dad are not so far as they share a heart language.  Here, the continents bridge.
I started color blocking this in an oil.  More to come on this one. 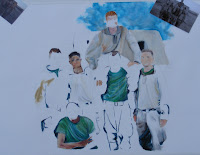 Also is an in process update on "Young Warriors"  This is an oil pastel utilizing oil bars and oil based colored pencil.  More also on this one to come.
Posted by Sharon A. Blair at 10:27 PM No comments:

Introducing "Morning Patrol" or Sunrise in a Dust Storm?  Not sure of the title yet.  The photos from one of my Syracuse Marine Parent's sons, Cpl Jenks, USMC 1/6 Battalion were taken in Marjah, last year.  My son's 3/6 Battalion fought in the same Helmand province for Marjah.  Often we would see news reports of these battalions fighting alongside each other.  Tina and Doug have been such a big help from the time Forest joined back in 2009.  When our sons deployed we exchanged the latest news back and forth to each other from our sons calls, the web and national news.  Those patrols, we know so little as civilians, can be brutle.  A day in the life of a warrior consists of 6 hours on patrol, 6 hours back up on post and 6 hours to sleep.  Many times that sleep is interupted.

In August I demoed at work with glazing layers of fluid acrylics over light molding paste.  I used a canvas that I had and had a canvas I had stretched a while back that I was saving for just the right time.  I am merging two photos on my peice.  This is a small peice but cool photo.  More to come.
Posted by Sharon A. Blair at 2:14 AM No comments: