Proud to present the framed, finished pastel portrait of Lcpl Nicholas Said in "No Greater Friend - No Worse Enemy"! 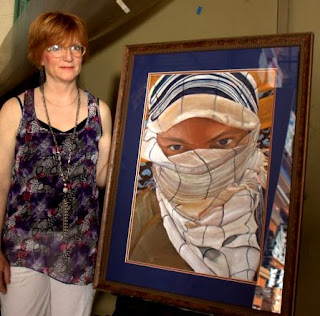 The frame is a special destressed burlwood frame with beading around the edge.  The mat matches his penetrating blue eyes.  Aren't you glad he is your friend and not his enemy?  Nicholas is a very special young man, just married in February.

This piece is getting its debue this weekend when I will be presenting my work for a grant here in Syracuse.  I will write more later.

Just a quick update on "Grief", now entering its final phase.  Every painting is charged with its emotion.  That has been my intent on every painting to visually tell their story.  As an artist in developing portraiture, I get involved with my subjects as if I am in the painting with them.  I know their loss, it is such a deep sense of grieving.  Though I have been painting this for a while, I found myself today feeling their pain and stopping to cry. 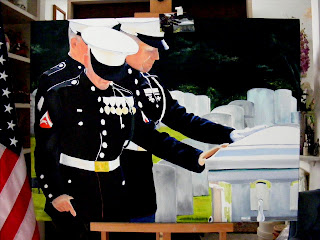 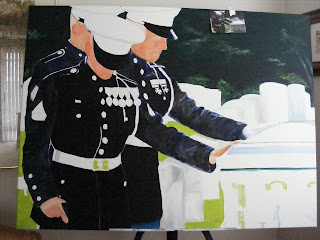 They are the bravest men I know, facing the final reality that could be any one of our sons and daughters.  Death has a great sting only to be consoled by knowing God has them in heaven.  Lcpl Gabe Raney is at peace.  We will always remember, never to forget.  These young men will remember this moment into eternity itself.  God watches over the grieving and broken hearted.

Penny Riley, Gabes mom, shared her memorial on Facebook and I asked for permission to link that with my blog.  She immediately said yes.  Part of Penny's grieving process has been to let people know who Gabe was in life and death.  She has shared often her pictures, her videos, and her very personal feelings of what she has gone through.  I find her to be a great lady, very strong (though I think she would be the first to say how weak she really feels), her faith unshakeable.  Penny's grace matches her outward as well as inward beauty.  And as a mom of a fallen marine, she wants you to remember Gabe and I want you to remember a families dearest sacrifice.  As you look at this link, please, never forget.   http://youtu.be/o3nsB2WVN0c 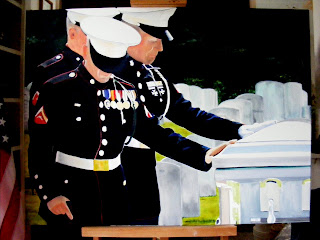 Showed this to a very good friend and artist on Saturday.  More about it to come.
Posted by Sharon A. Blair at 7:28 AM No comments:

Homecoming hugs are big life events.  It ranks up there with having kids, getting married, at least 20 of your most favorite Christmas Memories rolled into one celebration.  These events are shared with one peson or maybe a group of close family members.  Homecoming is unique.

You have 250 marines and their families have just gone through a 7 1/2 month long deployment with you.  You met each other under difficult situations.  We were anxious and worried more often than we had ever anticipated.  Facebook became important as we developed rich relationships whose bond became as strong as our heros had with each other in that far away land.  As families we prayed and shared each others burdens and joys.  Meeting everyone at Camp Legeune was like coming home to a family reunion.  We really knew each other, even before we ever met.  Best of all, each one of us received the best hug anyone could ever get; our sons were safe at last! 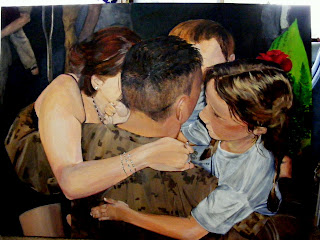 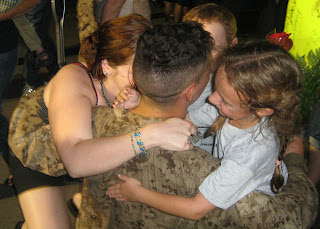 We lost nine amazing men.  They will never be forgotten by this band of 3/6 family.  Thank you Lord for my friends.  They are so dear to me.  I wish this deployment was only once, but all too soon our sons will go back and I will be praying for them again.  God answers your prayers.  So if you dont think there is much in that prayers remember your prayer and mine added together makes them stronger.  That's what keeps a military momma like me together.  At the end of a deployment relief is the homecoming hug we all look forward to.

Take a good look at the painting.  This is an evening photo.  The nephew, Maddox shirt's logo.  The word Hero with the Marine Corp emblem is showing.  It was a hot sticky night at 2:00 am.  His niece Riley's hair is all over the place due to the humidity.  CJ's shirt is wet with sweat, they had just finished putting away their weapons before they marched out to see us.  In his hand is an Afghanistan rose (American Beauty, of course).  Group hugs are the best as Rachel grabs CJ and the kids.  A messy unashamedly wonderful hug.
In the background there is a dad carrying his son, a wounded warrior and his pregnant wife (all my paintings and prints sold, 10% will go to the Wounded Warriors).  In the greyed out distanse is my son Forest and the side body slam hug I received.
Posted by Sharon A. Blair at 11:12 PM No comments: 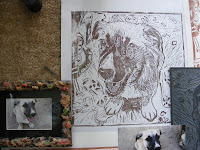 I want to introduce to you a Super Hero, "Weiner Wolf".  She's brave, she's daring, willing to leap canals and make it to the other side!  Well, actually due to the short legs and small stature, generally she didn't make it to the other side.  But after some well placed whimpering, she usually convinced someone to pull her out of the canal and Forest was just the kind of marine that would.  After all, she is Weiner Wolf and not a one of these brave marines would ever leave one of their own behind.
Heroes can be big or small, it doesn't matter.  Their effect left on those around does not necessarily have to be epic in deed, but they make a difference that resonates.  So what has this little Shepard mutt done to help these freedom defending heroes of ours?  So much more than meets the eye.  When I see that Weiner Wolf photo, I see her Superman cape, the fire in her eye says, "I can do anything!  And I am ready and willing to do it."  Her brave heart reflects the marines that surround her.  She will defend with all of her heart and life with either one approving lick on their noses or be a strangers worst enemy.  And the men that surround her have a soft spot saved only for Weiner Wolf in the midst of war, she can bring a reality, unconditional love still exits.  There is a great peace in hugging Wiener Wolf and in return, this Super Hero will sleep at your feet. 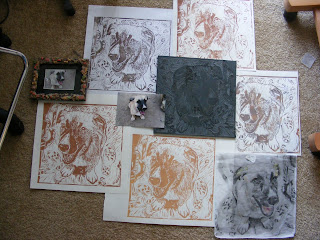 While I was working carving Weiner Wolf I noticed the little things in the photo that you might overlook.  Beyond the brave little glint in her eye look closely at the ground around her.  There is a flack jacket sitting on the ground probably just taken off.  The boot prints look like the photographer picked Weiner Wolf up and positioned her for the camera pick, saying, "Okay Weiner Wolf, stay"  Her foot print looks like she moved a little probably trying to stop from wiggling with excitement; "Staaay!  Good girl!  Weiner Wolf gets a cookie."
I had to try a first run of prints to check on the carving.  All the tests are good and Sunday, I will demonstrate printing Wiener Wolf at the CNY Artguild's Art Show and Sale.  After I will be sending them down to Camp Lejeune to give out to the guys who knew Wiener Wolf. 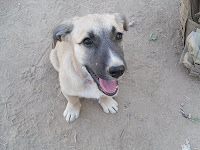 What I see in her reflects the marine corp values.  Good dog, Weiner Wolf.  Get em!
Posted by Sharon A. Blair at 6:22 AM No comments: