"A Military Experience - A Parent's Perspective" is back home from a week with the Modern Day Marine Expo and there is a lot to share.  Each time I share their stories, my mission becomes better defined. 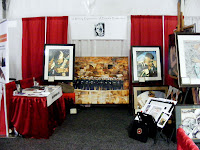 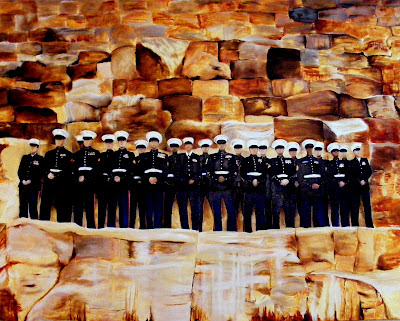 Introducing the finished, "Embassy Duty Guards" with Cpl Cameron Gianetto, USMC Embassy Duty Guard in Cyro 2010-2011.  Cameron stands the fourth on the back row.  When Doug and Tina Jenk's showed the photograph that November at our Syracuse Marine Parent's meeting of their son,s platoon.  I was taken by the immensity and timeliness of these Marines standing on the Pyramids of Egypt.  The detail on the faces I purposely kept vague so viewing it should be at a distance away.  The milled stone work is etched by the sands of time.  These heroes were charged to protect and defend our embassy.  A short time after that photo was taken, a Facebook post appeared in February.   His dad wrote "Pray for Cameron".   As parents we responded immediately with our prayers, our most powerful weapon.  Within two days we heard a post from Cameron.  "We feel better.  We are out of our blues and into our utilities".  Prayers kept going.  Then another post.  "Well, the FAST team has surrounded the embassy.  We are back in our blues."  Prayers for our heroes were answered as we watched the news.  The Egyptian government changed.
This week I had the honor to meet some of those Embassy Duty Guards that have served at the Ebassy in Cyro, Egypt.  This painting is the largest of the series at 48"x60" and took a 18 months to complete and was created for my heroes. 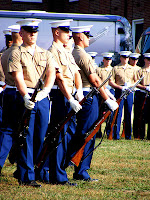 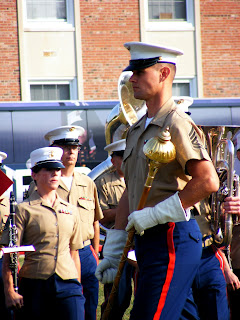 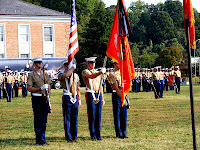 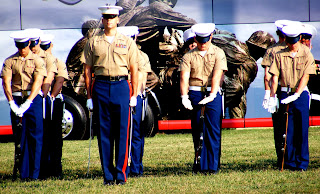 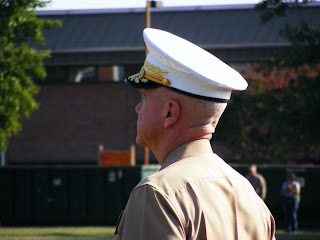 This was also a week to teach and share my mission with my heroes.  And there were many that came by from enlisted to the Comandant of the Marine Corp.  I have many Veterans that well fit into my heroes present and past.  Also, I have heroes that may not have been on a battlefield but have made a difference too with the protection they provide by manufacturing technical equipment used everyday by our heroes. 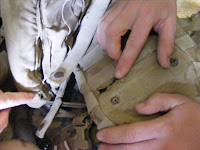 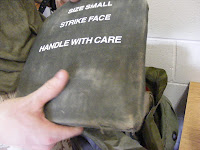 When Forest arrived home from
that first deployment, he showed me the flack jacket that sustained a hit with that 7.62 ml bullet that struck his camel pack and traveled around the sapi plate and through and out his vest.  I will never for get that time.  At the Modern Day Marine Expo I took time to give a heart felt thank you to the vendors who had a part in manufacturing the flack jackets that saved my son's life.   Those jackets have saved so many.  God gives you talents and he intends you to use them.  Sometimes people may take for granted what a strong fiber like Kevlar can do, or what happens when you mix science with ceramics.  Even paint to canvas can be a very powerful mix by the stories a painting has to tell. 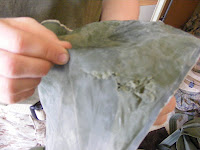 Their story has become my mission to teach:

"A Military Series - A Parent’s Perspective” is for the American Citizen.  As a parent, I have one foot in the Military and the other in the civilian world in which there is a disconnect that needs to be bridged. The paintings in this series cross that bridge by teaching the average American Citizen what our heroes in the Military sacrifice daily to keep us free and protected. As much as they protect us we need to stand behind them, for their honorable purpose is to make a difference in this world. 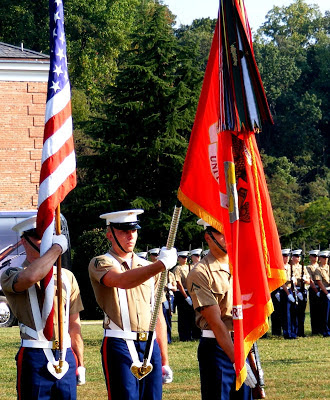 So many things have happened in these last few weeks. I was so blessed to be invited to the Modern Day Marine Expo. There were many events each day. See the Colors being presented? Notice the Marine Corp flag being presented forward. It has a very special detail of ribbons that not many civilians know its meaning. Each ribbon was added on to the flag to represent the war campains the Marines have been in since our country began from the Revolution, all the way forward to our present day war in Afghanistan. 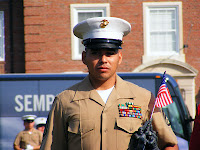 This Marine Corp flag is heavy and we all should be so proud of all they represent. The Marine on the Left was given a special award for his service. Just think of the brave men and women that have stepped up to serve and protect our nation through its history. I thank God to live here in the land of the free and protected by these brave men and women.

A Week With My 2nd Marine Division's Veteran's and a General Too!

Just got back from the 2nd Marine Division's Association Reunion in Buffalo, NY in which I was able to share my paintings, "A Military  Series  - A Parent's Perspective"!  The subjects in my series are mostly based on the 2nd Marine Division, in which my son .  Lt Col David B. Brown, USMC, (Retired) is the Executive Director and Sgt Maj Joeseph L. Houle, U.S. Marine Corps and Meghan McMahon, Executive Assistant play major roles in the organization and they so graciously extended an invite to show my paintings and had my mom and I join in on the events at the convention.

I have to share something that struck me, a civilian, so profoundly. The 2nd Marine Division traveled over to the Naval & Military Park in Buffalo. While we were there several Marines were recognized for their service in Korea. We had a catered dinner on the deck of the USS The Sullivans. I had heard the Marine Corp Hymn played many times over the years, but this time, it was very different standing amongst these men and their families on this ship. Time stood still as I observed the faces, the eyes of all those who served. At that moment of playing the Marine Corp Hymn, I started to realize the halls of Montezuma to the shores of Tripoli and all the battles fought were on their minds. As if they were transported back to that place and time each one served, I could see them remembering. It was a proud, purposeful, sad, sacred, deep and enduring looks that I observed. Just in case you have not heard me say it before, and you will hear me say it again, "Love my marines, all of them, no matter the age, they are my heroes!" 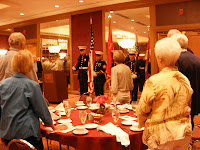 That moment brought out my admiration for that Marine Corp Hymn in a new and different way. I did not have a camera with me at the time. Through my tears, wish I could have captured that moment; perhaps another painting.

What a wonderful opportunity and experience to meet with Brigadier General Lori Reynolds, Commanding General, Eastern Recruiting Region Marine Corps Recruit Depot at Parris Island, SC. She is truly an amazing woman and it was an honor to personally show her my paintings. 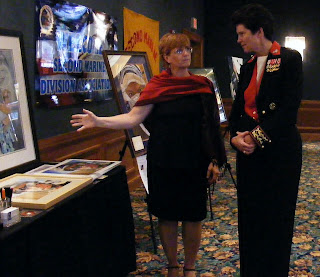 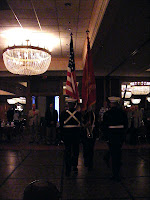 General Reynolds came in for the 2nd Marine Division's Reunion Banquet in which the food we enjoyed really good food and entertainment from the local Scottish Band and Irish Dancers. Thank you to the 2nd Marines, Love my Marines!  There is more to come.  In two weeks I will be on the move again with my series.  I will be traveling to The Modern Day Marine Expo at Quantico. The push is on to finish "Embassy Duty Guards", since those Marines are trained out of Quantico.  Remember the Giclee' Prints and card sets help fund and drive the ability for the paintings to be seen around the country.  Every bit of your support in this effort helps to tell their stories to all of America.  Click into my order page on the right of your screen.  For now, I am off to paint! 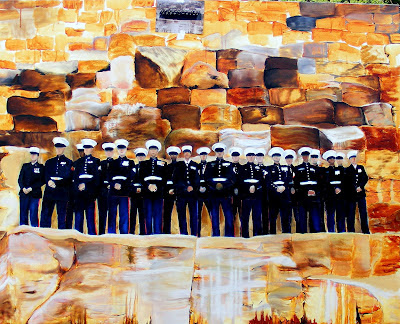 Well, it has been a long time in coming for this oil painting.  "Embassy Duty Guards" is nearing completion.  One of my Syracuse Marine Parent's son Cameron is in this painting with his platoon.  When people see the painting, many times I will ask them, "Where do think they are standing?"  Usually the response is, "They're in Afghanistan"  which is probably drilled into their minds by now because anybody who knows me, also know that Forest is my son who has done 2 tours there.  Once they hear it is the Pyramids in Egypt, most will take a step back and back and say wow.  That was my first reaction to Cameron's photograph.  I wonder how hard it was getting all those Marines in their dress blues up on that pyramid - no small feat!  Between the rocks,  keeping the faces not as detailed and its shear size of 48"x60", this paintng has taken a good deal of time to complete.  Because Embassy Duty guards are training takes place at Quatico,  I will have it done just in time for the upcoming Modern Day Marine Expo in Quantico, VA in two weeks. 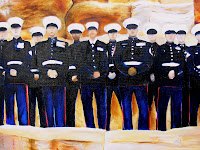 Like my other paintings, this one has its story too.  At the time November of 2010 this was taken in Egypt, it was that "calm before the storm.  In February of 2011 on my facebook page we saw a rather frantic parent asking everyone to "Pray for Cameron"  and we did.  2 days later another post came in from Cameron, "Got into our Camey's, we feel better now."  Then a few days later another post, "The FAST team has surrounded the embassy, so we are back in our dress blues".  I don't think he was too happy about getting back into those blues.  Forest told me they are hot and the neck is very stiff.  They used to be made of leather, that is why you may hear people call the Marines, Leathernecks.  They do look spectacular, but they are always happy to take off that blouse (Jacket).  As a Parent, these are anxious moments about our sons.  Prayer is the most powerful thing we do to combat the unkown concerning our sons and daughters in harms way.  All of the Syracuse Marine Parents started praying and God heard.  The Marines protected their embassy, the fast team did their job and all was well.

Getting ready to go to the 2nd Marine Divisions 63rd Reunion at the Adam's Mark in Buffalo, NY for Thursday and Friday.  Looking forward to showing "My Military Experience - A Parent's Perspective"!  Those boxed card sets and prints drive the ability for the show to travel, so if you are interested in having a piece of artwork for your very own, go to my order page here on the blog to get the info on where to send the check or M.O.  Once I have a day, I will complete the shopping cart pages on my website, hopefully by October.  When I get back I will have the finish this painting - more to come!
Posted by Sharon A. Blair at 11:23 PM No comments: