Underpainting to "I'm Out Here; Did You Forget Me?"

Just to finally put this one on the map of my series.  Here is the underpainting of "I'm Out Here; Did You Forget Me?". 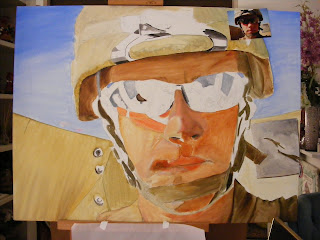 I changed my media on this one over to oils.  I may also employ oil bars and am still planning on pastel over if I catch the paint at the right time of dryness.  I want that powder to capture the grittiness of the Afghanistan sands out there.  Sandstorm season is settling down out there about now.  Don't forget them; keep praying because I want to see these faces that I paint again at homecoming.
Did I mention it was hot out there?  We think we have it bad here with our current heatwave of 100 degrees.  Ha!  That's nothing.  When Forest called last it was 135degrees.  Set a digital oven to 140 degrees and then stand in front of it.  Then imagine 150 pounds worth  of gear. 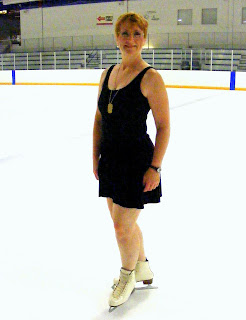 I am sending along neck coolers and a letter to Forest on where I was today.  While he worked with 135 plus temps, I wimped out at 100+ degrees and went figure skating.  No sunburns, but I did get an iceburn from a skid across the ice.  He'll be getting these pic's in his care package too.
Love my marine!
Posted by Sharon A. Blair at 4:49 AM No comments:

Updates and a Ready to Frame - "And We Prayed"

During the process of my paintings each one develops more meaning to its name as I work on it.  More details on the stories come about.  "And We Prayed" is no exception.  This was their miracle week.  For a grateful parent this was my answered prayers confirmed week.

Right around the time this photo was taken I received that call from Forest at work.  "I got shot.  I'm not hurt.  Mom, God's got me, keep praying."  But there is more, another guy in his unit was shot with the bullet entering the helmet and running around the inside of the helmet and ricocheting out!  Wow!  Aren't you just left in your mind saying, "Thank you Lord for protection, for flack jackets, for helmets.  Amen and Amen!".  With this painting I will display Forest's camel pack.   I want the viewers to take a good look at it too.  When you examine the camel pack you can see where that 7.62 ml bullet holes entered and exited traveling around the ceramic sapi plating, before exiting the bottom of his Kevlar flak jacket.

Here is the finished mixed media side by side pieces of "And We Prayed".

In my limited palette of colors I used Qinacridone Azo Gold, Interference Gold, Phatlo Green, Payne's Grey, Iridescent White and Silver in Acrylic paint.  Other mediums of acrylics are Miceacious Iron Oxide used in the camouflage screen to provide tooth for the PanPastel  and Molding paste put on by palette knife to give texture for the hair.  Oil bars were used and pastels were laid on top to give the gritty effect to the hands.  Metal leafing was gilded into the hair and parts of the clothing.  I collage handmade papers into the darkest shadows of clothing.

I did not take a lot of processes on the painting because part of it looked awful to me.  I had taken a mixed media drawing seminar and wanted to add some of that to my piece that did not turn out the way I wanted because I went off my palette colors.  I fixed it and it became better than expected.
Just a touch on the series progression to the public.  On July 4th I showed 7 of my paintings in this series at the Syracuse Chiefs baseball game.  Many people saw the series and heard the stories behind them for the first time.  My prints were done by Joe Minneily Studio's and two prints sold.  The Wounded Warriors Project will receive 10% of my sales.  There is much to do concerning the series and the traveling it will do.  More on that later.
Posted by Sharon A. Blair at 9:35 PM No comments: